STEWART INDUCTED INTO HALL OF FAME 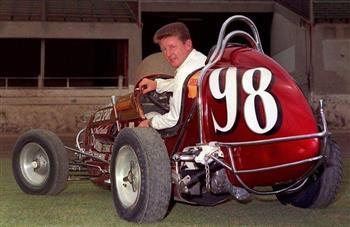 One of Australia’s most popular Speedcar competitors was inducted into the Australian Motorsport Hall of Fame during the Melbourne F1 GP weekend. Three-time national champion Johnny Stewart is one of 51 competitors recognised in the Hall of Fame, primarily for his never-repeated hat-trick of titles from 1966-68.
Johnny passed away in 1995, but his daughter Melinda was on hand to receive his treasured Hall of Fame medal from Speedway Australia GM Tim Savell (pictured).

Two members of the motorcycle speedway fraternity were also inducted, “Bluey” Wilkinson and Leigh Adams. They join Garry Rush, Ray Revell, Jack Young, Lionel Van Praag and Jason Crump from the 2016 induction, for a total of seven speedway members of the Australian Motorsport Hall of Fame.